Know Which Strategy Style Is Right for Your Organization 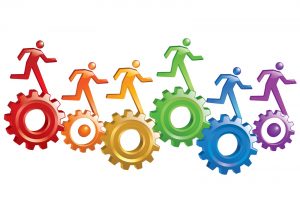 Companies that correctly match their strategy-making processes to the competitive circumstances of their industry, business function, or geographic markets perform better than those that don’t.  Choosing a strategy for setting strategy required asking two questions about your situation: How unpredictable is your environment? How much power do you or others have to change that environment? The answers give rise to two critical styles for executing strategy:  shaping, and visionary.

Shaping
A shaping strategy is best in unpredictable environments that you have the power to change. In new or young high-growth industries where barriers to entry are low, innovation rates are high, demand is very hard to predict, and the relative positions of competitors are in flux, a company can often radically shift the course of industry development through some innovative move. A mature industry that’s similarly fragmented and not dominated by a few powerful incumbents, or is stagnant and ripe for disruption, is also likely to be similarly malleable.

In such an environment, a company employing a classical strategy approach to find the best possible market position runs the risk of selling itself short, being overrun by events, and missing opportunities to control its own fate. It would do better to employ a strategy in which the goal is to shape the unpredictable environment to its own advantage before someone else does — so that it benefits no matter how things play out.

A shaping strategy embraces short or continual planning cycles. Flexibility is paramount, little reliance is placed on elaborate prediction mechanisms, and the strategy is most commonly implemented as a portfolio of experiments. Shapers focus beyond the boundaries of their own company. They seek to rally a formidable ecosystem of customers, suppliers, and/or complementors to their cause by defining attractive new markets, standards, technology platforms, and business practices through marketing, lobbying, and savvy partnerships. In the early stages of the digital revolution, internet software companies frequently used shaping strategies to create new communities, standards, and platforms that became the foundations for new markets and businesses.

That’s essentially how Facebook overtook the incumbent MySpace in just a few years. One of Facebook’s savviest strategic moves was to open its social-networking platform to outside developers in 2007, thus attracting all manner of applications to its site. Facebook couldn’t hope to predict how big or successful any one of them would become. But it didn’t need to. By 2008 it had attracted 33,000 applications; by 2010 that number had risen to more than 550,000. So as the industry developed and more than two-thirds of the successful social-networking apps turned out to be games, it was not surprising that the most popular ones — created by Zynga, Playdom, and Playfish — were operating from, and enriching, Facebook’s site. What’s more, even if the social-networking landscape shifts dramatically as time goes on, chances are the most popular applications will still be on Facebook. That’s because by creating a flexible and popular platform, the company actively shaped the business environment to its own advantage rather than merely staking out a position in an existing market or reacting to changes, however quickly, after they’d occurred.

Visionary
Sometimes, not only does a company have the power to shape the future, but it’s possible to know that future and to predict the path to realizing it. Those times call for bold strategies — the kind entrepreneurs use to create entirely new markets (as Edison did for electricity and Martine Rothblatt did for XM satellite radio), or corporate leaders use to revitalize a company with a wholly new vision — as Ratan Tata is trying to do with the ultra-affordable Nano automobile. These are the big bets, the build-it-and-they-will-come strategies.

Like a shaping strategist, the visionary considers the environment not as a given but as something that can be molded to advantage. Even so, because the goal is clear, strategists can take deliberate steps to reach it without having to keep many options open. It’s more important for them to take the time and care they need to marshal resources, plan thoroughly, and implement correctly so that the vision doesn’t fall victim to poor execution. Visionary strategists must have the courage to stay the course and the will to commit the necessary resources.

Back in 1994, for example, it became clear to UPS that the rise of internet commerce was going to be a bonanza for delivery companies, because the one thing online retailers would always need was a way to get their offerings out of cyberspace and onto their customers’ doorsteps. This future may have been just as clear to the much younger and smaller FedEx, but UPS had the means — and the will — to make the necessary investments. That year it set up a cross-functional committee drawn from IT, sales, marketing, and finance to map out its path to becoming what the company later called “the enablers of global e-commerce.” The committee identified the ambitious initiatives that UPS would need to realize this vision, which involved investing some $1 billion a year to integrate its core package-tracking operations with those of web providers and make acquisitions to expand its global delivery capacity. By 2000, UPS’s multibillion-dollar bet had paid off: The company had snapped up a whopping 60% of the e-commerce delivery market.

Once you’ve correctly analyzed your environment and you’ve identified which strategic style you should use, you will need to monitor your situation and be prepared to adjust as conditions change over time. Clearly that’s no easy task. But companies that continually match their strategic styles to their situation will enjoy a tremendous advantage over those that don’t.