The Language of Persuasion

Suppose you are preparing for a potentially contentious meeting with someone with whom you’ve worked closely for years. She could be a fellow manager you want to convince to support an initiative but whose position in the matter differs from yours. Or, he could be a long-term employee you’re hoping will accept new responsibilities that will take him away from his familiar, comfortable duties. Suppose further that you expect more than a little resistance. Is there anything you could say at the start of your meeting to reduce your coworker’s reluctance to cooperate with you and your plan? 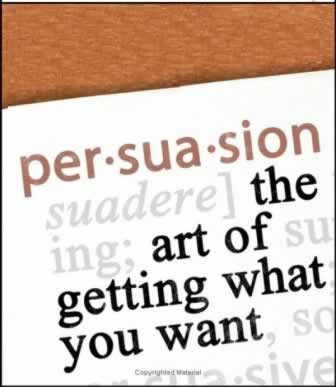 The relationship is the message

There may well be a simple comment you could make that would incline your colleague to move willingly in your direction. But, to locate it, let’s leave the workplace and examine another context where conflicting interests must be carefully negotiated—the romantic relationship.

Recently, a team of research psychologists in Texas recruited dating couples into a study of communication patterns. The researchers asked each pair to identify and discuss an unresolved issue in their relationships, one that either partner (or both) sought to change. With recording instruments running, the scientists registered precisely what the communicators said, as well as the effectiveness of the communicators’ various appeals in swaying their intended targets.

The findings are eye-opening. The communicators used three differing styles to gain persuasive success. Some tried what we can call the coercive approach, threatening their partners with regrettable consequences if they didn’t yield (e.g., “If you can’t change on this, I’m just going to have to do some things you really won’t appreciate” or “Unless you’re willing to agree here, I don’t see how I could possibly help you with x”). This hardball strategy was a disaster. Not only did it fail to spur the desired result, it produced the opposite effect, driving the partner farther away from the communicator’s position.

Other communicators tried a less combative technique that we might label the rational approach. They attempted to argue that theirs was the more reasonable view and that it only made sense for their partner to adopt it (e.g., “If you’ll just look at this thing rationally, you’ll see my point” or “Once you take everything into consideration, you’ll want to change your mind”). Although not as misguided as the coercive approach, this persuasive style didn’t fare well either, leaving its targets wholly unchanged.

But there was a third set of communicators who employed a breathtakingly simple and successful procedure that we term the relationship-raising approach. Before making a request for change from their partner, they merely made mention of their existing relationship. They might say, “You know, we’ve been together for a while now” or “We’re a couple; we share the same goals.” Then, they’d deliver their appeal: “So, I’d appreciate it if you could find a way to change your stand on this one.” Or, in the most streamlined version of the relationship-raising approach, these individuals simply incorporated the pronouns “we,” “our,” and “us” into their request.

The outcome? The relationship partners exposed to this technique shifted significantly in the requested direction (Oriña, Wood, and Simpson, 2002).

Besides the effectiveness of this approach, two more of its qualities are worth noting. First, its functional essence is a form of evidentiary non sequitur. Stating, “You know, we’ve been together for a while now” in no way establishes the logical or empirical validity of the communicator’s position. Instead, it offers an entirely different reason for change—the relationship itself, with all its attendant trust, strength, and security. Back in the 1960s, the brilliant media commentator Marshall McLuhan observed that often in the realm of mass communication, “the medium is the message.” I’m willing to claim that often, in the realm of social influence, the relationship is the message.

The second remarkable quality of the relationship-raising route to persuasion is that it provides nothing that isn’t already known. Typically, both parties well understand that they’re in a relationship. But that implication-laden piece of information can easily drop from the top of consciousness when other considerations vie for the same space. True to its name, the relationship-raising approach merely elevates one’s awareness of the personal connection in the moment before a request so that it will have due impact on the response.

This basis for change fits quite well with the way I have come to view much of the research on influence lately. The thing that is most likely to guide a person’s behavioral decisions isn’t the most potent or familiar or instructive aspect of the whole situation; rather, it’s the one that is most prominent in consciousness at the time of the decision.

We’d be fools to think that a force as primitive and powerful as human connection can direct change only within romantic relationships. We’d be greater fools, still, if we failed to recognize that such a force carries implications for business negotiations.

Take, for instance, the outcome of a New England hospital directors’ rancorous meeting concerning the best way to structure a proposed merger. Because initial opinions were deeply divided, the session quickly devolved into an exchange of heated arguments. Fearing that the downward-spiraling direction of the interaction would destroy the merger opportunity altogether, one board member jumped to his feet and bolted from the room. In less than a minute, he returned with a fire ax he’d pulled from a corridor case. Calmly accounting for his actions to his wide-eyed colleagues, he reestablished the relationship they all shared with one compelling comment: “We can take this to our own necks—like we’ve been doing so far—or we can use it to cut ourselves the dominant share of the market so that none of our competitors can match us.” An agreement emerged in short order.

Might we hope to employ the relationship-raising approach as successfully in the sort of tension-filled meetings I described at the outset of this article? I believe so. But, it won’t be easy, for two reasons.

To start, the laws of human perception are against us. In all manner of comparisons, people are more ready to search for and register separations than connections. It’s so for basic dimensions such as the weight and size of physical objects: observers are more attuned to differences than they are to commonalities (Olson and Janes, 2002). And, it’s so for more social dimensions, such as the presence or absence of existing unities among interacting parties.

An analysis by Kellogg School of Management’s Leigh Thompson of 32 negotiation experiments involving more than 5,000 participants displays an interesting trend: Thompson found that, among the nine experiments that contained judgment measures, rival negotiators failed to identify shared interests or goals 50% of the time—even when those commonalities were real, present, and waiting to be tapped (Thompson and Hrebec, 1996). People are more ready to search for separations than connections.

Making matters worse, additional research has shown that we are especially unlikely to focus and rely on existing partnerships under anxiety-provoking circumstances (Driskell, Salas, and Johnston, 1999). Thus, in the difficult kind of meeting I asked you to envision—with a contrary colleague or resistant direct report—the chances that we’ll use the relationship-raising approach drop further.

But, oh, the benefits that would flow if we could overcome these biases and learn to harness the approach appropriately. Consider the findings of a team of British researchers who examined the styles of 49 professional labor and contract negotiators in real transactions over a nine-year span. After identifying the most successful bargainers of the group, the researchers searched their data for the factors that most distinguished these excellent performers from those whose scores fell into the average or poor ranges. One stood out: the superior practitioners spent 400% more time looking for areas of mutuality (e.g., shared interests) than did their mediocre counterparts.

Of more general benefit, other researchers have determined that when workforce members are focused on a shared organizational identity, their pro-organization intentions and activities increase in such arenas as organizational alignment, loyalty, and citizenship (Haslam, Powell, and Turner, 2000).

Finally, and most generally, research has revealed how easy and effective it can be to commission the force of an existing relationship, even a remote one. In a study conducted on a college campus (Aune and Basil, 1994), charity solicitors more than doubled their success by preceding a donation request with five words: “I’m a student here, too.” It is telling that so large a profit resulted from so few words.

With the relationship-raising approach to persuasion, the barriers to change need not be battered down. A brief, deft reminder can be sufficient to make them fall. No ax is required.

Robert Cialdini is Regents’ Professor of Psychology at Arizona State University and president of Influence at Work.

This article appeared in the September 2004 issue of Harvard Management Update.